Personally, it’s not really my thing, but still, when I think about my beloved Nashville residents and their Valentine’s plans it breaks my heart.

Take Rayna and Deacon for example. Can you imagine Rayna having to endure another grand “old school” gesture from Luke when all she really wants to do (beside Deacon) is roll her eyes at him with her “Did he just ma’am me?” look and return to whatever it is she was doing even if it was just staring at a crack in the wall.

Or Deacon, sitting through another date with Megan when all he wants to do (besides Rayna) is get up and bang his bad hand against the wall just for the sake of it because he’s bored to death.

I don’t think I’ll be able to call myself a fan or even more important – a friend, if I don’t lay a helping hand. These misguided people are trying so hard to build a friggin a life that’s good, and what do I do? Just bitch and moan about their poor choices. That’s not a friendly behavior especially when they’ve got no one to turn to. It’s like a blind leading a blind out there.

Well, No more! In the spirit of friendship and helping people become the best version of themselves, I decided to offer some much required tough love to my struggling Nashies, and tell them the truth for once…the whole truth. Not just the twisted version they tell themselves or the one that pops out of nowhere during passive-aggressive outbursts (yes, Deacon and Scarlett, don’t pretend you don’t know what I’m talking about).

That way, they might be able to break the cycle of falling over and over into the same old patterns. Oh, don’t smug now Luke and Megan. None of you is the light at the end of the Rayna and Deacon tunnel unless that light is a train coming at you from the other side (and sorry Will for using trains as a metaphor here. Too soon?)

So sit back, pour yourself something stronger than you, unless you’re Deacon (or Scarlett) and join my Nashville tough love intervention:

1. Avery – Not to burst your blondes bubble but can I just please suggest something? OK, so did you notice that your morning after with Juliette resembled a certain other morning after scene with another Nashville couple? (Hint: half of this couple paid you a visit that sent Juliette into hiding). Well, sorry to break it you, but the resemblance doesn’t end there and it’s time to realize what you’re in for: first you write a song together and fall in love, then you hook up, become her writing partner/producer in your case and play guitar for her for 20 years. Then, you officially turn into Deacon. So…good luck with that! Just, whatever you do, please try not to black out after you propose and pay attention to her ovulation cycles. Are we clear?

2. Juliette – Oh, sweetie, how do I put it gently? The odds of you NOT screwing it up are almost equal to the odds of you dressing appropriately to…well, any occasion. The sad truth, my beloved one-liner thong girl, is that like any self respected low self esteemed person you are your own worst enemy.

Yes, you took that leap of faith and really opened your heart to someone. That’s great, but not enough because you did it out of fear of the unknown. The thought of standing still and just let things happen (or worse, not happen) was too scary for you, so you felt you had to be proactive. Otherwise you’ll go mental. Hence the pink macaroni and second round of love declaration. Problem is, even now, when you’re happy we and you can already smell trouble because no matter what you do, this fear is not going anywhere, and unless you are ready to accept it and embrace it, it will only get worse.

My advice is similar to the one Avery gave you – stop mixing up your fairytales and trust that you’re not invisible no matter what. Oh…and for heaven’s sake, whatever you do, don’t cook. 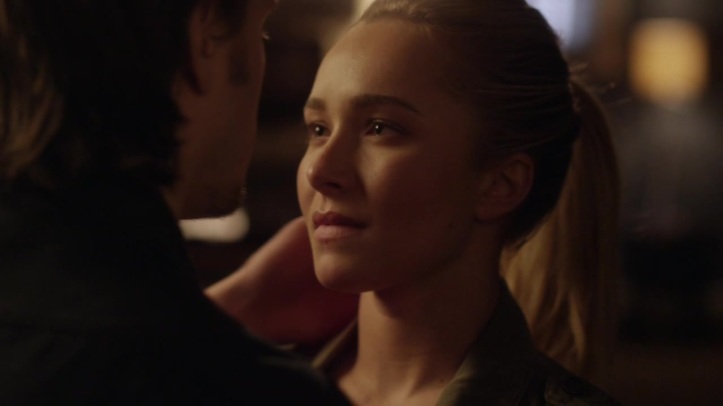 3. Gunner – In the words of Tami Taylor, “You’re an idiot!” If there’s anyone that deserves a slap right now (beside Liam, but that’s for totally different and kinky reasons) it’s you. “All I felt was the music”?? Seriously Gunner? Seriously????

You know, I don’t even know why I’m even upset. After all, you’re exactly the type of guy that with all his good intentions fucks up women the most. At first, you seem like a good, descent sensitive (not to mention hot) and artistic guy, so when you show interest in someone her mind goes immediately check, check, check on her imaginary men-checklist. But then, she quickly realizes that all is well as long as she’s willing to make it all about you, because this artistic façade and the constant state of confusion actually cover weak, childish and egocentric nature.
Naturally, you tell her she’s just crazy and insecure when she brings it up but still attempt to indulge her cause you’re such a “good guy”. Nevertheless you make sure she remembers you’re doing it just for her and because of her. The first part makes her feel special (soon it will become important). The second – guilty. Then you have a period of long heated arguments in which she seriously start to suspect she really is crazy (she’s not), but then it stops and for a while it appears to you that everything is back to normal (translation: she loses herself completely in the relationship and it’s all about you).

Eventually, she leaves you. You don’t see it coming AT ALL (god knows why since you drove her away) but fear not, because five minutes later you meet someone new and act like none of it ever happened. After all, you’re a guy who’s living in the moment (oooh, deep!).

One of the many thing you don’t understand at this point is that after your breakup, no matter what she did that girl who believed that she was special to you (told you it’ll be important) thought about you, a lot. The thing that gave her the strength to move on and make the best out of this situation was the belief she did the right thing (although she’ll probably blame herself) and that she’s not alone in this and you also love her, think about her and miss her at times. Ouch.

So now, imagine her surprise when you suddenly tell her there’s nothing there anymore, or better yet, imagine her feelings. You know what, I’ll help you with the last part that since I don’t have the next century to wait for you to figure this out by yourself: She feels betrayed, small and unloved in a way you can’t even imagine because…you’re an idiot!

Maybe you’ll grow up and realize what you’ve done but maybe not. If not, all I can say is that when you’ll reach 40 it’ll be a lot less attractive and at 50 it’ll be borderline pathetic (two words and I’ll give it a rest: Johnny Depp).

4. Zoey – Read the above and see where you fit in although I’m giving you this free advice just out of sisterhood bond because I don’t really care and also, girl code. Unacceptable no matter how you spin it.

6. Teddy – Call me a hopeless romantic, but I believe third time’s a charm. So what do you think about marrying Megan, everyone’s grief counselor?

7. Tandy – You need to get some. Soon! Look, you haven’t really been to a Spa, you lied to your sister for months and now your father died. You need sex. Teddy suggested himself in that radio interview. That’s sweet but since we have more pressing matters I suggest, for now, Luke. Why? Because you need to be punished for betraying RayRay and that seems to be punishment enough. Look how miserable your sister is.

OK, this is the end of part one of our Nashville romantic intervention. Keep reading part two and part three where I delve Nashville’s current biggest romantic disasters: Scarlett, Deacon and Rayna.