Nashville Gets Us: The CMA’s Love/ Hate Fest

To celebrate Nashville Winter Finale this week (December 10, 10/9c) we asked fellow fans to share their favorite moments from season 3 so far. There were lots of fans that chose moments from the CMA awards episode – 3.08 – ‘You’re Looking at Country. Shuntesha N Harris (@smyle_itsTink) loved it so much that she picked more than one. Did you love these moments as well? Share your thoughts with us and follow us for more great moments coming your way.

“My favorite moment in this season is actually a tie between two moments. The first one involves two different set of characters in two different places but each say a lot about the other. During the Nashville CMA awards, while Deacon was at home watching the show with Scarlett, Rayna was at event with her “love”. The fact that Deacon just couldn’t stop himself from watching her accomplishment, root for her and being there for her in spirit (and Text) showed me just how much he loves her. He gave new meaning to the saying: ‘Love and support even from a distance’. All the while she was winning the awards her man was jealous but her real love was proud.

6 Lessons We Learned from Nashville 3.08 – You’re Looking At Country

The second moment involves Juliette and Avery. They are clearly in love but both don’t know how to show their love. The CMA’s gave them both a way to do it, in their own special way. First Juliette showed it, by defending Avery to his father and then Avery by telling Juliette that she will be an awesome mother and finally standing up to his father.

Love is complicated and messy and it takes a lot out of a person but these four characters – Rayna, Deacon, Juliette and Avery show it’s possible and it also makes for great television!” 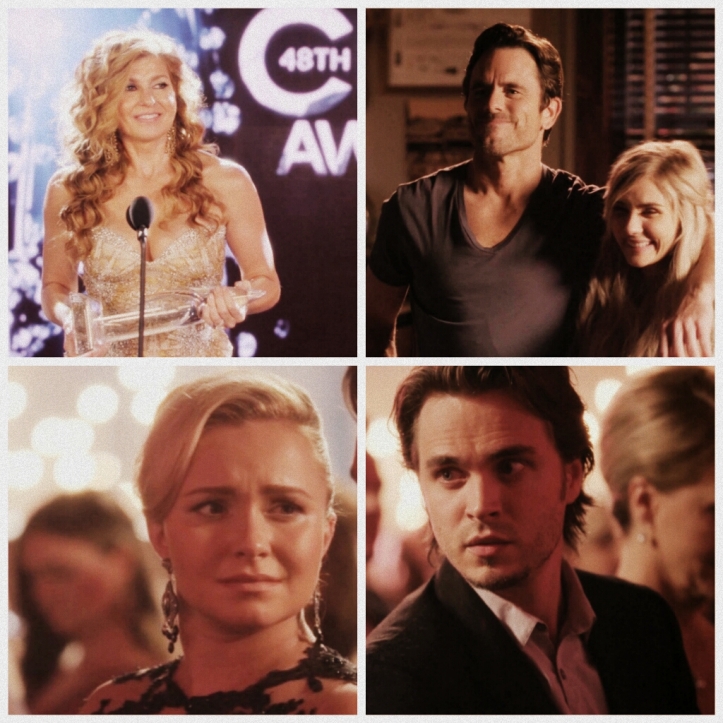