We all watch Nashville for various reasons. One of them is the very complex characters. We all have our favorites, the ones we feel, understand and identify with the most. Sometime it’s a character who remind us of us and sometimes it’s a character that embody qualities we appreciate and maybe even admire or that just touch a soft place in our hearts. All the characters on Nashville have flaws and we all found ourselves wanting to hug them, yell at them or roll our eyes at them like they were real people.

When it comes to the Luke Wheeler, this hasn’t been the case for most of us and that’s exactly why he’s the subject of our second article in ‘Fans Write About Nashville’ special series: Nashville – The Big Characters Defense.

Luke Wheeler rolled into Nashville with his hat on and wheels up against our will and refused to leave. We didn’t like him from the first moment he put Rayna on the spot and made her sing and then spoke ill of Juliette behind her back. The thin line between good southern manners and chauvinistic behavior in his courtship style, the fact that he was condescending towards Gunnar (and Scarlett at some point) and that he was, let’s face it, EVERYTHING that our beloved Deacon wasn’t didn’t help either. Then he and Rayna got serious and we…weren’t happy.

We had no interest in watching this relationship evolve and even less interest in getting to know who Luke Wheeler is. We focused on the fact that he’s interrupting our Rayna and Deacon time, on his flashy behavior, his ego problems, insecurity and all the traits that made him, in our eyes, not worthy of our time.

But did we really do him justice? Did our love for Rayna and Deacon blind us? Or maybe it was the somewhat shady beginning of his character and the fact that at the time we felt that we were “forced” to accept and like his character ? (P.S. we love you Nashville, but NEVER AGAIN please!)

Why in a show that’s packed with imperfect, complex characters that make mistakes left and right so many of us refuse to root or even just give a chance to the guy that actually got it right? Why do we insist on disliking the guy that doesn’t have addiction problems and doesn’t swallow in self-pity; the guy that despite being divorced with kids doesn’t come with half the emotional baggage as his (ex) fiancé and even manage to overcome it (most of the time);  the guy who is the biggest star in country music that knows how to balance work and play and make himself a global brand and the guy who simply “has it all”?

Are we missing something?

Ellie G.(@Ellieca1673) thinks that we do. She thinks that if we’ll look closely and rewatch (always a good idea, by the way) we’ll see that there’s more to Luke Wheeler than meets the eye and that he may not be Deacon, but he’s Luke and as such he also has things to offer that add a new and interesting flavor to the Nashville mix.

You knew it already? Angry already? Curious to see where it leads?  Keep Reading what Ellie has to say.

Related: Refresh your memory with Nashville 3.10 – ‘First to Get a Second Chance’ Review: Are You Happy?

“Luke wheeler is such an interesting character to examine.  I will admit,  I wasn’t a big fan in the beginning, and I don’t think I’m alone. Luke was hard to like at first, not only because he stood in the way of a Deacon-Rayna reunion, but because he never really gave us much to root for.  How do you root for a guy who already has everything?  He was rich, successful, good looking, happy, and the partner of choice to the Queen of country music.  Where else could a character like that go, but down?

That said, there were a few clues along the way that pointed to a guy who had just enough vulnerability to become the latest victim of Rayna’s crazy life.  And that, at a minimum, earns him some major sympathy points from me. He’s definitely got some room to grow, so let’s take a look.

To me, nothing says Luke Wheeler like the statement he made to Will earlier this season when Will came to him for advice

on managing relationships. Luke suggested Will have his friend sign a release/waiver form, ’cause ‘If it ain’t love, it’s business.’

And in a nutshell, we had Luke Wheeler. For Luke, life is divided in two basic camps – love and business, without much in between, and seemingly, without much crossover, either. This one phrase explains a lot about the man’s outlook and values. He’s a good man, but he’ll do business with scumbags to get where he wants, though he won’t befriend them and he knows where to draw the line.  He loves music, but more as an avenue for financial success, than as a real, deep passion.  He loves his children, especially how he’s able to provide for them.  He’s apparently not nearly as upset about his divorce as he is about the money he lost to his ex, and that explains his insistence on a pre-nup with Rayna — because of course, that’s business, too.

There is also a contradiction in this statement from Luke, however. There is one area where love and businesses really do coincide for him – and that’s in business itself. The guy loves business. He loves the lime light, the fame, the money and the perks.  And this doesn’t make him evil or wrong, it just makes him a lot like many other super famous & wealthy folks in the world (I imagine) who enjoy their lives.

So where’s the rub? What allows him to get caught in the web of Rayna Jaymes? What’s his Achilles heel?

For a long time I thought of Luke as a pure narcissist. But after reviewing Season 2 & 3 again,

I changed my mind.  The main factor was the scene in Season 3 episode 2,  where Luke is with Rayna at her family home while she sorts through her parents’ items.  Luke tells Rayna how wonderful it must have been growing up with the world at her finger tips, to which Rayna replies, that it was ‘over-rated.’  However, Luke’s retort is key as he interjects, reasonably so, by correcting Rayna, “havin’ nothin’ is over-rated.‘   Rayna tries to explain, that though she had a very comfortable life growing up, she did not have the love of the family that Luke enjoyed, especially from her father. What’s striking is that throughout this scene, Luke never really seems to appreciate what Rayna’s telling him and he can’t imagine Lamar as anything but a ‘GREAT’ man (with capital letters). Furthermore, though he’s curious at first, he never pushes Rayna as to why she won’t keep any of Lamar’s things.  My guess is, he really doesn’t want to know and he probably can’t even imagine.

The message to me was loud and clear. Luke’s childhood, while loving, was hard on him.

t he not only felt the sting of poverty, but that it hurt him to watch his parents struggle and that this provided the main source of his drive to succeed. And this explains why he can’t understand why Rayna would ever choose Deacon over him, or why Deacon could have chosen to be Rayna’s support system instead of making a bigger name for himself, or why Rayna wouldn’t jump for joy at the idea of not having to work, or being able to send her kids to boarding school, because making it big is what he’s always worked for and dreamed of.

Yes, in a strange way, I would say Luke has been naive.

And in a sad way, I wonder if he’s ever truly experienced deep, deep love – the kind of love that may have seen his parents through their hardest times, or the kind that could make you put up with alcoholism, disaffection, and more, just for the hope of one day feeling it again.

So, my hope for Luke is that after he processes his anger (and I think there will be a lot of it), he realizes that he loved Rayna for who he thought she was in his mind, but not who she was in reality, and I hope he’ll wonder why he was so blind.  I hope he’ll meet someone who loves him for the man he is and appreciates all he’s worked so hard for, so he can open himself up to an intimacy that I wonder if he’s ever experienced. 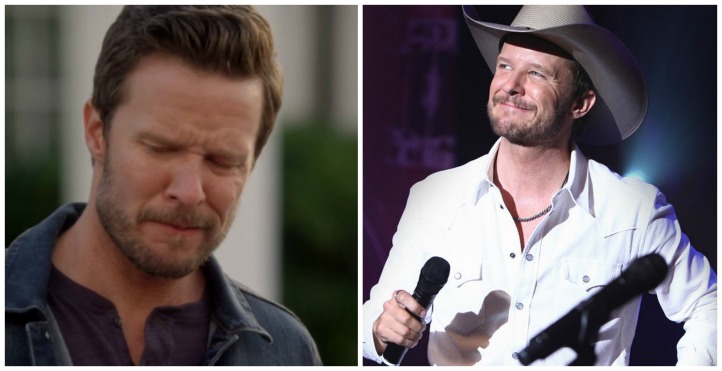