The ‘Nashville’ Characters Defense: Will Lexington – Behind a Broken Smile

There’s a famous quote by the author C.S Lewis: “It’s funny how day by day nothing changes but when you look back everything is different”.

When it comes to the evolution of the subject of this article – Will Lexington– and his long painful journey out of the closet, this quote seems fitting. That’s because on the one hand it seems like the fact he’s still not openly gay is an indication that everything is the same with Will but when we look back at his journey from the moment he first stepped in to Nashville until today we start to notice that everything is different and Will has come a long way.

Sadly though he didn’t make it to the so-called finish line yet.

Related: Where We Left off Nashville Character at the End OF Season 3 Winter Finale

om tour and visit his good (and only real) friend Gunnar. When he gets there he sees Gunnar playing football with his “son” Micah as part of his attempt to be a good father. It’s clear that Gunnar is not very good in football (or in playing house) so Will immediately jumps in and shows Micah “how it’s done”.

This scene shows us in less than a minute what Will is denying himself – authenticity and a real home. In his heart Will really is the all American man. The kind that living a life where he teaches his son how to play ball and having a picket fences house with his family suits him better than Gunnar for instance.

The only thing that separates him from it is his misconception of himself and the not so gay friendly industry he’s in. As a result this beautiful quality that comes so naturally to him becomes a mask and a burden. He exaggerate his cowboy image to the extreme and hides behind it instead of just being himself.

His face already hurts from smiling his perfect smiles where if he could just stop pretending he would have had the same life he pretend to have – only in an authentic and truthful way as a gay man.

Related: Six Lessons We Learned from the CMA Awards

It’s not easy to root for a man who sabotage his life that way for so long, betray the trust of so many and even if

he doesn’t intend to, make his wife pay for his bad decisions. In theory we would have preferred a braver man who embrace his sexuality much more easily and turn the coming out of a gay country star into a personal triumph. It can serve as such a positive message, right?

But is it really the truth? Are we all really that strong to overcome prejudices and embedded self-hatred all by ourselves?

Heather (@lostinsuburbia) thinks we’re not and that’s exactly why we should root for Will Lexington, the lonely man with the perfect broken smile that got trapped in his own web and why we should not judge but show compassion towards him. She thinks he deserves our support, because in some way or another we are ALL Will Lexington.

Let’s read what she has to say:

Says Jeff Fordham to Will Lexington on Nashville’s winter finale after an article in an online rag speculates about Will’s sexuality. The only thing that seems to scare Will more than the fact that he actually is gay, is the possibility of the world finding out about it so he accepts Jeff’s “advice” (and his poor choice of words) and follow it.

Despite the fact that’s it’s hardly the first time Will embrace a negative view about himself and not only refuse to embrace his sexuality but also complicates the lives of the people around him, I still find myself rooting for Will.

Self-acceptance seems far off after his antics in the finale, however. Will attempts to get Layla, his for-appearances-only wife, to join him on his tour in order to counter the gossip. Later at a party, it becomes apparent to Will that there is something going on between Layla and Jeff. Will tells Jeff to end it. Jeff does exactly that, encouraging Layla to go on tour with Will.

That should keep up appearances, right? Mr. and Mrs. Lexington on the road? Will doesn’t stop there though. A girl at the party corners him when he’s alone upstairs, taunting him that maybe the rumors are true after he turns her down. This article is about Will, so I won’t even get into her issues. Will takes the bait, falling into bed with the woman, and of course Layla walks in, seeing them together.

Though we don’t see his reaction after the act, I have no doubt Will immediately regrets sleeping with the woman. He didn’t want to, and if he knew Layla saw them together, he would feel awful. It isn’t surprising that Will would go to such lengths to hide who he is though. Throughout the series he’s gone from denial to sneaking around, putting on an act for the reality show and getting and staying married to Layla.

But his regret doesn’t

matter anymore because back at the party, Layla swallows a bottle of pills and as Jeff and Will meet up outside post-groupie-sex, they find her face down in the pool. Jeff mentions to Will that Layla went looking for him. It’s only a matter of time before Will realizes what put his young wife over the edge. Being on Will’s journey with him is part of what makes us as viewers feel close to him.

How can you not love such a complex character? How can you not relate to him on some level? Will does the wrong things a lot of the time, but he’s a good person with a big heart. He is just lost because he is working so hard at denying who he really is.

In the struggle for self-acceptance, most of us are Will Lexington. Though it may be under different circumstances, we have been through, or will likely go through a similar journey at some point in our lifetime.

We may not all coming to grips with our sexuality, but rather have other things about ourselves we need to embrace, parts of ourselves we wish we could change. They might be things we think will make us more desirable or likable to others or things we ourselves are fixated on. “If I could change fill in the blank, I’d be better, happier, more easy to love.”

It is understandable why Will, an up-and-coming country star, would be nervous about letting his fans know that he is gay. His sex appeal is one of his selling points, and country music fans are assumed to be a more conservative bunch. There is no doubt Will fears losing what he has worked to gain and being shunned by his fans.

I think it goes deeper than money and fame though. Will himself feels what he is doing is wrong. If he didn’t, he 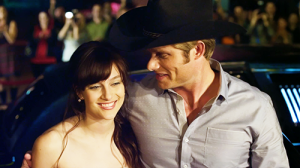 wouldn’t try so hard to deny himself and fight his attractions, only to end up giving in and sneaking around. From my perspective, that is why he married Layla in the first place.

He believed that was the “right” path for his life, and would somehow deter his real feelings from coming to the surface. Will didn’t realize this. He wanted to be in love with her. Unfortunately, Layla was collateral damage.

Layla’s breakdown and descent into being face down in the pool may well be the impetus to Will taking a long hard look in the mirror, and reevaluate his life and how his choices have affected himself and those around him. What is in store for Will? Will he hit rock bottom? Will the guilt over Layla eat him alive? I can’t wait to find out and to continue his story with him.

I can’t wait for him to look back and realize everything IS different and better because the truth set him free. I believe his heart CAN handle this.

Is it February yet?