If I’m being completely honest, ‘I’ve Got Reasons to Hate You’ wasn’t my favorite episode of the season since it felt like a filler episode where there’s too much repetition of stuff there were already discussed at length. Having said that, beside the great music, the joy of watching the differences in management styles between Rayna and Jeff, and Juliette’s caramel cookies, there were few great family moments in Deacon’s household and in Rayna’s that were not only very poignant and beautifully acted but also very helpful to better understand the characters and the situation they’re in. So here are three thoughts about Deacon’s illness, Rayna’s parenting choices and the worst family member around – Beverly O’Connor.

Related: About this blog
Related: Read our latest episodes reviews

1. It’s My Disease – that’s what Deacon told Scarlett after he realized she invited Beverly in an attempt to find him a liver donor. Technically he’s right – it’s his disease since he’s the one who’s sick. But he’s also wrong since he’s not alone in this 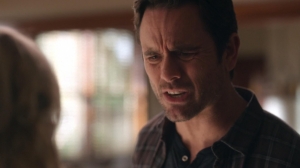 world and has people who for them his battle is also their own.

His insistence that it’s his disease shows us that he has come a long way but still need some work on his martyr complex.

Deacon takes responsibility for everything he has ever done or thought of doing and doesn’t stop there. He also takes upon himself the all the blame and the shame. Moreover, Deacon is so noble that he believes it’s his duty to fix things on his own and keep it to himself so he won’t become a burden or hurt others with his “imperfection”.

The problem is that in reality this type of behavior achieves the exact opposite – it hurts the people he loves the most if by pushing them away or by putting an unbelievable pressure on those that manage to stay close (like Scarlett now) since on top of the difficulty of the situation itself they also feel helpless and very lonely.

Deacon didn’t have to think twice before taking full and sole ownership on his disease – it’s his default. It’s also a reminder that Deacon has been sick for many years, only that the name of that disease wasn’t cancer but alcoholism so this type of behavior is hardly new. Watching the pressure Scarlett is under now, can give us a glimpse about what it has been like for Rayna in the past.

The way Deacon is coping with cancer now is an opportunity for him to do things right this time. Meaning not hurt the ones he loves just because he’s so hurt and scared inside and by that also deny himself what every person with any serious illness needs the most – a support system. 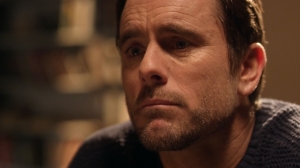 His martyr complex didn’t help him get better in the past. It also broke the person he loves the most, Rayna in such a way that until this day her first thought when he disappears is that he has escape again instead of worrying that something is wrong.

Deacon is older, wiser and much stronger now. He more than earned a second chance in life and he has so much to lose. The only way he’ll be able to get through it all is by letting people in and sharing the burden. So no Deacon, it’s not just your disease.

2. We Were Once Friends – If you’re human, there’s a 99% chance you found yourself at least once in a situation where you’re asking yourself how is it possible that you and a certain family member you don’t particularly like are related?

If your name is Deacon Claybourne or Scarlett O’Connor and you’re related to Beverly O’Connor, you probably asked yourself this question more than once.

Judging by Beverly’s behavior so far, it really is hard to believe that the gentle and kind Deacon and Scarlett are related to such bitter and unloving person.

But as we found out during the episode it wasn’t always like that. Beverly and Deacon were once friends and even the family theme song, as sang in Deacon’s kitchen was “A Friend of Mine”.

So what changed? One answer is the Beverly is the spawn of the devil…but we’ll disregard that possibility now (until proven otherwise). Another answer is that a combination of some bad choices, fear and a nervous breakdown that gradually changed her and made her the woman she is today because choices actions matter and patterns of bad choices and actions create a character.

Although this answer makes sense it still doesn’t explain why the same thing hasn’t happened to Deacon and Scarlett.

Going back to the song this “happy” family sang in the kitchen, I believe that music is the answer. Deacon and Scarlett chose music as a way of living where Beverly gave that up and that made a difference.

Music certainly didn’t make life easier for either Deacon or Scarlett but it kept their heart open. It brought them to a city with like-minded people, gave them an outlet for their thoughts and feelings, helped them connect with others and in many ways kept them sane.

3. This Is Real Life –What do you tell your teenage daughter when her recovered alcoholic father that she only recently established a relationship with suddenly disappears? How do you handle this situation when you know she’s not a child anymore and you watch constantly trying to pushing boundaries and demanding to be treated like an adult? What do you do when your daughter is Maddie Conrad and she’s a sensitive, observant, and honest girl who also demands answers? What can I say? It’s a tough one and that’s exactly what Rayna had to face and she did it in a time where she and Deacon were “giving each other space”.

Related: Nashville Review 3X11- ‘I’m Not That Good at Goodbye’: It’s About Time

Last season after Maddie asked to see Deacon, Rayna went and talked to him about it. He was worried about his recovery and about whether he has something to bring to the table (martyr complex, remember?) but Rayna expressed different types of concerns. All she cared about was his ability to be dependable and made it clear that the condition for opening this door with Maddie is that he won’t disappear and close it on her. Back then Deacon stepped up. At first it was through music lessons under the supervision of Rayna and Teddy but gradually it evolved to a real father-daughter relationship. Now, when that door is now wide open their relationship reached their first real hurdle with his disappearance and that’s EXACTLY what Rayna feared of. The question is what does helping and protecting your child mean in this type of situation? Rayna had several options.

The first is continuing the pattern of solving the situation for her without her knowledge. For Maddie, that would be the preferable option since she’ll get exactly what she wanted. But that’s also not real – that’s just more lies and while it was understandable and even necessary when she was a little girl, but she’s not anymore.

Another option is throwing Deacon under a bus and letting out all her frustrations. Meaning, she could have just goa head and say Deacon is not a dependable person in general. That approach (that too many parents use even without noticing) would have eventually probably led her to say something like “you’re just like your father” next time she’ll fight with her and use it as an insult. Dependable or not, Deacon doesn’t deserve to be demonized and Maddie doesn’t deserve to hate her dad and herself.

But there was a third option which is to be open and honest and that’s exactly what Rayna chose to do. At first she did try to protect Maddie, not by reaching out to Deacon but by trying to buy him time to do the right thing by offering a substituted Guitar teacher, Colin Linden (the real life Deacon Claybourne and the man behind Deacon’s guitar sound).

Then, when it didn’t work and she was cornered by Maddie to open up and give her honest and real answers, Rayna chose to change. No more deciding for Maddie what’s best for her, but instead listening, sharing and explaining the best she can out of a place of love and not resentment and disappointment.

Rayna explained to Maddie what alcoholic means in a relationship and shared something from their (hers and Deacons) relationship to give it context. 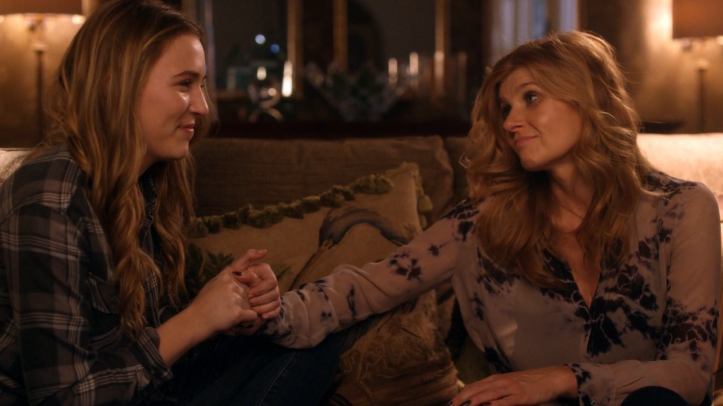 It is not easy feeling so disappointed by your father, it’s not easy watching your mother hurting and it’s easy hearing your father is not perfect but this is part of life, and Rayna soften the blow. She let Maddie in by offering her to write a song together and left the door wide open for Deacon to come back into Maddie’s life by helping her understand the situation and him better. Yes, she’s still mad and it’s her every right to be she doesn’t hate her father, doesn’t think in any way that it’s her fault and most importantly, she’s not alone with it.

Rayna’s choice was to respect Maddie. She treated her as an adult and not as a little child. That brought both of them closer together in a situation where is so easy to grow apart and it also left a door open for Deacon. This option is the most difficult one of the three because it’s the most honest and because it requires both parties to make a real effort to communicate but it’s the best one. I don’t know what prompted that change in the usually very closed off and private Rayna. It’s hard doing it but as the song goes this is real life.