Nashville Episode 5.06: Not So Holy

Shira: Another Nashville episode I wasn’t crazy about. Did you like it?

Tora: There were glimpses of goodness, but they were few. Look, I’m usually the one to say, if you can’t say anything nice don’t say anything at all and I really don’t like saying bad things about two episodes in a row!  But, it’s not any show – it’s Nashville and we love it and they do stupid things to it! So I feel although we love it we need to say it.

Shira: I think I loved everything related to Rayna, Deacon and the girls. It was like a show within a show. One thing that certainly improved this season the writing for Rayna, her relationship with Deacon and the whole family dynamic. Yes, there’s a ‘But’ after that but we’ll get to it later.

Tora: Yes, agree regarding the family plots. My favorite “family” scene was the Maddie’s talk with Deacon. It was not full of wise words, but more Maddie just saying what was on her mind…loved that.

Shira: It was great, Deacon can really see her. I also enjoyed Rayna’s conversation with her. The honesty, and all those parallels between their lives…beautiful. When Rayna said “I hope you know you deserve to be happy” it was more than just words of advice; she knew from experience what she’s talking about. Think though, what I loved most about those parenting scenes is we saw what she gets from each parent – They complete each other.

Tora: Yes, and there’s also Daphne. She finally had a story, which also finally got Deacon out of the house. I was starting believe he was part of the interior design!

More: A Life That’s Good Is More Than Another Nashville Song

What’s Up With Maddie?

Tora: I still find Clay just way pretentious. “I’m putting on a show”, “Everyone is putting on a show”, “You are so young”, “The only person I hurt is myself”.When all these things are laid out loud instead of things we should discover, it just sounds pretentious. Perhaps if we were to find out those qualities instead of him declaring them, it would be a bearable story.

Shira:  He’s a problematic character, I agree. Still don’t think he’s necessarily pretentious but certainly moody. I know he’s supposed to be bipolar but what I see so far is someone who acts like…Maddie. He has a really short fuse (even shorter than her which says a lot), he’s super defensive and decides to break up with her every 5 minutes.

Tora:  Speaking of Maddie. Her outburst at her parents saying they hated Clay because he was black felt very unnatural. What has ever given her the idea they would do that?

Shira:  Have no idea. Personally, think it was a defense mechanism. She lashed out saying irrational things because she knew there’s something wrong with that relationship.

Are They Seriously Planning to Kill Rayna?

Shira: Another week and another round of “When is Connie -now available for pilot season-Britton leaving Nashville.” Look, I don’t know what’s going to happen with Rayna and the horrible stalker story, but I feel like part of the reason Rayna and Deacon are currently joint in the heap as parents is to set the stage to the possibility she won’t be there. We see how he looks up to her, even more than usual, and thinks she has all the answers and that she’s a super mom. We also see how she tries to build his confidence. If she won’t be there, for a limited time of for the whole duration of the show, that’s the perfect setting for the story about the grieving single dad….And my que to stop watching the show.

Tora: That seems like Rayna had premonitions of what is to happen, preparing him. That is scary!

Shira:  It is!! And in such scenario the concept album will be her will and love letter to him. Jeez, it sounds so morbid and cruel it just might happen.

Tora: Please no! I’m still waiting for the show to continue Rayna’s journey rediscovering the artist in her and Deacon’s struggle to find a place in her life not only as Maddie’s father. Hope we’ll get there.

Rayna and Juliette Sipping Tea Together

Shira: We did get something we asked for las week – a Rayna and Juliette scene.  It was nice. Made me really wish they will actually do something together. These two have always been the core and the show as a whole is always at its best when they work together.

Tora: I’m sorry but I sort of fell asleep at the Rayna and Juliette scene. Nice that they had it, but where is the chills?

Shira: Unclear. Here’s hoping they’ll do in the future something more meaningful than sipping tea. After all, seems like Rayna wasn’t completely on-board the idea of a Gospel album.

Tora: So, Juliette goes all in with Church. The hair, her dress…There has to be a twist later, right? The Angel is an evil monster trying to get to her money or something close.

Shira: I’m not counting on it. From what appears now, the angel is on her way to sing with Juliette on her gospel album!

Tora: Starting to think you were right all the way. I was hoping for another turn on it, but now I don’t know. By the way, Avery’s “You look serene” made my list of top horrible moments.

Shira: I just hope we’ll still recognize Juliette by the end of it. As of now, feels like we’re losing her.

Tora: It’ll sure be boring without it.

Shira:  Thinking how to express my thoughts on this story…I think the fact Juliette is seeking for something outside herself to rely on and by that expand and strengthen the foundations for her existence is a progress for her. To put Juliette Barnes, from all people , in a position where she literally can’t escape the situation and rely on herself, is problably the worst thing that can happen to her. Even with PPD she knew she had somewhere to run to and that’s the stage. My problem, and it seems to be a repeating critic this season, is the storytelling. They exaggerate the difference between the “good” life style of the “Angel” and Juliette’s “bad” life. The more Hallie is portrayed as holy, Juliette looks bad and sinful. 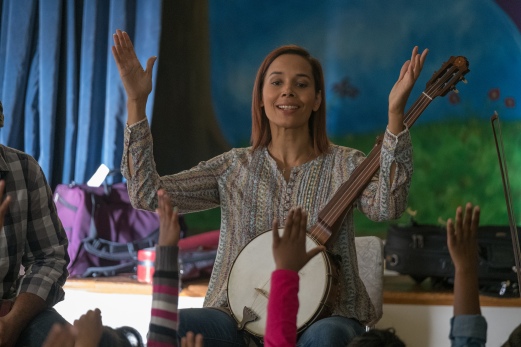 Tora: Yes! It makes sense that Juliette is searching for something, for sure. It’s the way they are telling it that is troubling. Again, make it more complex and subtle. For example, the “angel”,of course she sings for kids. That’s makes her a saint!

Shira:  Which, even if all they intended was to give us a Banjo lesson and film East Nashville’s kids center, plays directly to Juliette’s motherhood issues. Now we know: A good woman goes to Church, doesn’t chase fame and fortune, lives to serve and erase her sexuality. In this scenario either the Angel will fall from grace after spending too much time with Juliette, or Juliette transform her personality completely. It doesn’t have to be either or.

Avery is on Stage again

Tora: Other than Rayna and Deacon’s family moments (and Daphne in general) my favorite part of the episode was seeing Avery on stage, being himself, not putting on a show.

Shira: It was about time.

Tora: I think Avery’s story is the one I like best, because it’s playing out in the background of everything else. I love this type of storytelling, more nuanced.

Shira: I like it too and hope it’s not one of the stiries they will stop in the middle. It’s one story this season that feels organic. Unlike Scarlett’s story, which rewrites a big part of the character’s background, with Avery it’s a normal progression. Someone like Avery that used to be so ambitious and dedicated to his craft until he preferred playing on the street just to stay in music, can’t just forget it.

Luke Wheeler Is Back and Will’s Got a Fanboy

Tora: Other things I like. Not a big fan of Luke Wheeler, but it was nice with a big stage performance for once. And I loved hearing the first phrases of my favorite song “If I Drink This Beer” while we got to see my favorite scene of the episode. The one with Zach sneaking back stage to talk to Will.

Shira:  Good choice of song it was. Kept thinking Rayna is still there listening to Luke’s breakup song…from her.

Tora:  Hahaha! That is why he played it of course.

Shira:  Have to admit, I miss Luke. Didn’t think I’d say it after the rocky start we had with this character but now I do.

Tora: I don’t miss Luke. He was horrible to Layla. Cannot be redeemed. Didn’t mind their little chat though.

Shira: I blocked all the Layla story…with half the plots from season 4. I always enjoyed the moments he and Rayna were friendly, as well as he and Deacon. Really feel because the romance between Luke and Rayna prolonged longer than any of us wanted (and took the life of an innocent cake) we missed out on the opportunity to develop the friendship.

Tora: I really liked Zach and Will. The tense atmosphere of the scene.

Shira: Still don’t know what to make of Zach. When he talked to Rayna and Zach he has an ulterior motive. I don’t care what they try to show us but as of now believe he’s the stalker and the real danger to Rayna. Unless, of ocurse, he’ll really fall for Will and love will heal him, like it healed Deacon’s scar…

Tora: So if he’s the stalker it means that in this over-the-top stalker drama they will sneak in a twist or two to throw us off, but in the more emotional down-to-earth storylines they go straight on without any finesse of subtlety.

Scarlett’s Pygmalion Storyline. Why Is It Even Happening?

Tora: The Scarlett scene where she watched the music video…I can’t even talk about. It was just so wrong!!!

Shira: There’s no need. We said everything we think last week and nothing has changed. It’s still horrible and we still hate it.

Tora: Haha. Yes, it is and yes, we do. You know, my favorite Scarlett moment in the series is still her “Juliette have asked me to come out here and make some noise, but I’m the kind of artist who prefers to whisper” Why the hell can’t they let her whisper? Please Nashville, let Scarlett whisper and make her confident in that!

Shira:  We need to send them to gender classes.

NOW IT’S YOU TURN. HIT THE COMMENTS AND TELL US WHAT YOU THINK