‘Nashville’ Episode 5.05: All Kinds of Wrong

There’s no doubt Tora Liledahl and Shira Gur love Nashville CMT and grateful for its return. But, this week’s Nashville episode was not one of their favorites and that’s an understatement.  Read our discussion on Nashville 5.05 – Love Hurts. Here’s hoping for a better episode next week.

Tora: It was a horrible episode! There were glimpses I liked, but that’s about it.

Shira: The music video really tested my patience. 3 different men, Damien, Gunnar and Zach, spent half the episode mansplaining to Scarlett how she should own her femininity and how to be strong. I would love to see Scarlett keep growing and discovering who the hell she wants to be, but not in a way that build her strength through humiliation and credits her feminine sexual awakening to the condescending men around her. Yes, sure, another story of a woman reclaiming her power after being victimized by some man and men explaining to a woman how to be a woman was exactly what we needed…Not!

They put Scarlett in the most un-Scarlett scenario and call her difficult for having reservations and feeling uncomfortable. In what scenario this is remotely ok?

Tora: It’s not! I only liked Scarlett’s outburst in the middle accusing Damien for thinking “all women are secret sexpots dying to come out.” Unfortunately no one took what she said to heart. It was all so horrible, using the words “weak” and “strong” about women in strange demeaning ways. I’m horrified!

Shira: Scarlett has always been an introvert. That’s just who she is, but here they attributed it to her shyness and fear. One has nothing to do with the other! Criticizing her for being an introvert is saying introversion is a weakness and unsexy and there’s only one way to be sexy, which, according to this episode –looks very similar to a typical male fantasy.

Tora: Yes!! When Damien’s “she is a woman without filters” I’m like hello!!! Scarlett is an introvert and introverts have a million filters but there’s nothing wrong with it. So my first objection was really, why would anyone think this is an appropriate story to go with their song?!? The video demo last week had nothing to do with Scarlett and this had nothing to do with her. Rayna keeps claiming that she knows Scarlett, but why would she then think this video is a good idea? Also calling her “sensitive” says she doesn’t know her. She didn’t need protection, she needed support!

Shira: Rayna slightly “redeemed” herself at the very end when we hear her at the background telling Bucky she should have trusted her guts but still, she focused on Scarlett’s experience and how much “fun” she had instead of on the bigger issue. Scarlett is not a child. She proved her strength more than once already and if her next step is discovering her sexuality and her on-stage persona, it should be on her terms and in a way that empowers HER! You know, when I think back, in season 1 when Scarlett and Gunnar sang “Fade into you” it was one of the sexiest moments on the show. The only difference was, she was treated like a human being there and not like a lost child or an experiment!

Tora: Can’t quite get over it, how they kept telling her how she was and who she was, even Rayna, and how she first in her outburst fought back, but in the end, instead, got her insecure and Gunnar got the task to “lift her up”. It was awful.

Shira: It was! With this direction I will not be surprised if she’ll end up sleeping with this Damien who will become her “vessel” for sexual awakening. Seriously, Nashville? That’s how you want your women to grow? Never thought I’d have a woman issue with Nashville but after this, I do! Fix that!

Tora: This episode, and some of the reactions I’ve seen for it from people saying she’s “annoying” and “difficult” is, to me, all of a more reason to tell a true Scarlett story. Let her be who she is without everyone commenting on her and trying to “improve her”

Tora: Not sure how I feel about Clayton. In the last episode he was in, I thought he was too vain. Now he upped that to self-absorbed. There were no nuances in this story at all and it was a bit painful to watch. I did like Lennon in it, though.

Shira: She was great. As for Clayton, I had problems with the writing of his character but didn’t think he was vain.

Tora: All that “I’m so mature, I’m so broken, I’m this and that, but I still keep calling you because I want to see you.” Annoying and self-absorbed.

Shira: Interesting. I agree it was annoying but I thought it wasn’t because he was vain but 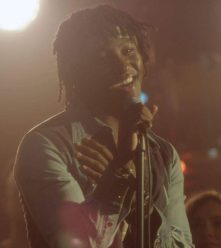 because they pinned too many issues on him. Is Nashville trying to make Clayton the poster boy for “diversity” on the show? In one episode he had 3 (!) relationship conversations with Maddie where he gave her 3 different reasons for why they shouldn’t be together.

First he told her he is older, then black, then bi-polar. And then there’s what we already know which is he is a struggling musician who grew up with an addict mother. At that rate, I was expecting he’ll also reveal they’re actually brother and sister. This character is currently all over the place. As you said – no nuances.

Tora: He was a caricature instead of a character. And yes, you can (and should) bring in diverse actors and give us new stories. But don’t make such a huge thing about it by putting it all on one character. Treat them as actual characters!

Shira: Exactly! It also, I think, took away from the whole love story. I can easily understand why Maddie fall in love with him and fall into the trap of the tortured artistic soul that needs saving (we’ve all been there) but….

Tora: It was all too much and too fast.

Shira: Yes! The reason we love Rayna and Deacon or Juliette and Avery is because the show took time to establish the bond and reveal the backstories. Here, in one episode, they jumped from falling in love, have the image of one of them shattered, feel torn, have a crisis that bonds them, break up, have their heart broken and get back together. Now add the complicated backstory and it’s just too much.

Tora: I feel the same. I think it makes perfect sense for Maddie to fall for him, he is older, good looking, a great musician and then adding the tortured part. That made perfect sense, but the story was a mess. Doing all of this in an episode and a half hurts the story.

Shira: I do think though what they are trying to do is actually make a parallel between Maddie and Rayna by letting her date a musician with issues. Hope it will come up somehow.

Tora: That could be interesting. And I have to say that in general the show needs to stop with the tragic mum stories. There are too many of them already.

Shira:  Agreed. Enough with the dead mothers. Nashville turned into one big orphanage.

There were still couple of things we did like!

Tora: Still, not all was bad. There were tidbits I liked. Maddie’s “I’m going out. Meeting a boy” and her parents reaction was priceless.

Shira: Yes! When Rayna replied to Maddie saying Clay is a musician with “That’s nice” and Deacon added: “Is it?” couldn’t stop laughing.

Tora: And the parenting scenes, liked them too.

Shira: Yes, they were a united front and it was cute.

Tora: Also loved the fact she confided in Juliette and how it was done. She shared her problem without getting into specifics, giving Juliette an opportunity to give her an answer not defined by any bias of any sort.

Shira:  I enjoyed the “history lesson” Clayton gave Maddie and the fact we get exposed to more genres of music in Nashville. In general, I love they put more emphasis on the music business, the creative process and the city. Also thought the music club scene was fun and the music there was great!

Tora: And although the story was messy, one intention that I liked was to focus one episode on Scarlett (and also Maddie). Scarlett is an interesting character and a well done Scarlett episode could have been amazing.

Shira: Speaking (again) about Scarlett – By the end of the episode it looked like Scarlett and Gunnar’s days together are numbered. To be honest, I don’t care that much if they stay together or not, but if they’re doing another Scarlett episode, would sure love to watch her have fun for a change, and on her own terms.

More: The Importance of Rayna Jaymes to Nashville (and the world)

Shira: Ok, Zach. What does he want? Is he coming on to Will or trying to sign him as an artist? In any case, I really don’t like him.

Tora: I like Zach, but think he is too good to be true. Maybe he was coming on to Will…I’d like that.

Shira: There’s something off with him. One thing that made me excited and scared at the same time, was his suggestion to do a behind-the-scenes film for Rayna and Deacon. Why do I get the feeling he’s trying to drive her over the edge?

Tora: Wonder what crazy narratives he has in mind for them…

Shira: I think Zach is trying to drive Rayna crazy and take over Highway 65 like that. The way he “suggests” stuff and dares Rayna to do them while pretending it’s to help her business seems very calculated to me. I will not be surprised if he’s the stalker or the person who sent him.

Tora: I guess he was the first suspect, than they steer away from him, making him look good, and then can come back later showing he is crazy. So yes, it would not surprise me either. Also because he is rich and powerful makes him potentially even more psychologically dangerous, not only physically.

Shira:  So, misogyny, caricatures and a stalker story that make it more and more plausible we’re about to lose Rayna. Overall, not a good day for Nashville.

Tora: No, gloomy day for sure!

Shira: By the end of this episode, other than Scarlett, the only person I felt any compassion towards was poor kleptomaniac Randall.

NOW IT’S YOU TURN. HIT THE COMMENTS AND TELL US WHAT YOU THINK